Don’t forget, today is the last day to enter the BBQ giveaway contest.

The picture does not do this soup justice. I had found that soup is just a great standby, even once the chill thaws a bit. I kept seeing recipes for tortilla soup and finally decided to give it a try. I have a chicken tortilla soup that  is one of my favorites but I found myself tempted each time I saw one of these recipes.

This soup is healthy, spicy and full of flavor. If you make the baked chips you get the low cal version but still the crunch factor. The great thing about soup is that you can freeze part of it for later.

I created my own recipe after looking over several others. Most called for jalapeno peppers but I substituted it for a chipotle pepper. If you want to you could add some fresh corn to the soup at the very end.

Preheat the oven to 375 degrees F. 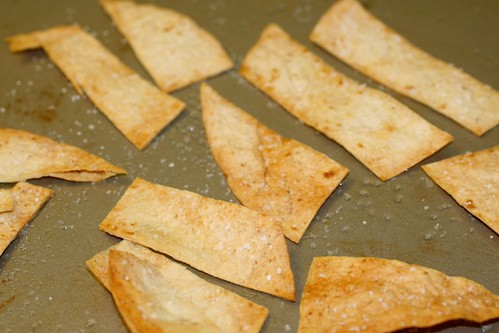 Brush both sides of each tortilla with oil, using 1 tablespoon of the oil. Cut the tortillas in half, then cut each half into 1/4-inch wide strips. Arrange the strips on a baking sheet, sprinkle with the salt, and bake until crisp and golden, about 12 minutes. Remove from oven and set aside.

Heat the remaining 1 teaspoons of oil in a large heavy skillet over medium heat. Add the onion and cook for 5 minutes, stirring occasionally, until onion is soft and translucent. Add the garlic, jalapeno, cumin, and oregano and cook for 1 minute more. Add the broth and tomatoes, bring to a boil, then reduce the heat to low and simmer for about 10 minutes. Stir in lime juice.

Remove the pan from the heat and puree with an immersion blender or in 2 batches in a regular blender until the soup lightens in color but chunks of tomato remain, about 30 seconds. Serve the soup topped with the tortilla strips, a dollop of sour cream, and a sprinkle of cilantro.