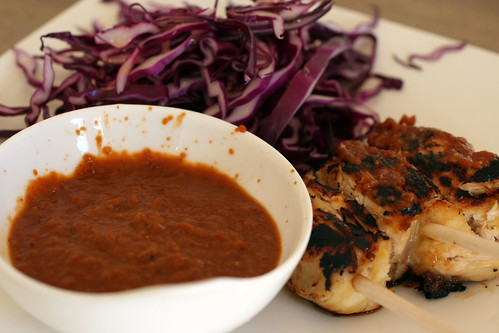 Being a self confessed Food Network junkie I have watched Bobby Flay for year and made a few of his dishes. Last fall I visited Mesa Grill while on a trip to NYC and was blown away by the flavor in all of the dishes.

When I came home I bought his Mesa Grill Cookbook, an updated version of the original one I had several years ago.

This weekend I decided to try the Yucatan Chicken Skewers With Red Cabbage Slaw and Peanut Red Chile BBQ sauce. I know, a mouthful! But it is a flavorful combination and would be a hit as an appetizer at a BBQ or as a dinner served as a quesadillo, taco or wrap.

It is not a quick recipe but a series of recipes, many of which can be made ahead.

The Mesa Grill BBQ Sauce is good on its own and is the base of several other recipes in his book.

Skewer each chicken piece with 2 skewers so that they lay flat. Place the chicken in a large shallow baking dish.

Whisk together the orange juice, lime juice, honey, oil, chili powder, and garlic. Pour over thighs and marinate in the refrigerator for 1 to 4 hours.

Preheat grill to high or grill pan over high heat.

Remove skewers from the marinade and season with salt and pepper on both sides. Grill for 4 to 5 minutes on each side or until just cooked through.

Remove chicken from skewer, place in a butter lettuce leaf, drizzle with some of the peanut-red chili sauce, and top with slaw, mint, and chopped peanuts.

Heat the oil in medium saucepan over medium heat; add the ginger and cook until soft. Increase heat to high, add the BBQ sauce and chicken stock and cook, stirring occasionally, until reduced by half. Whisk in the soy sauce, peanut butter, chipotle puree, and honey and cook until thickened, 20 to 30 minutes. 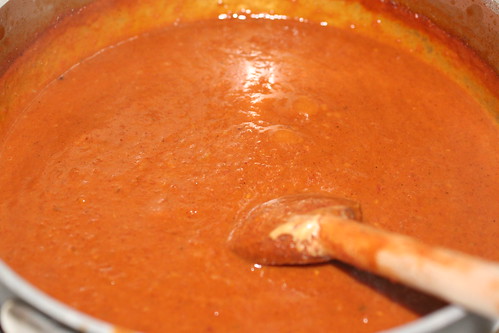 Transfer the mixture to a food processor and puree until smooth. Season with salt and pepper, to taste. Pour into a bowl and allow to cool at room temperature. Sauce will keep for 1 week in the refrigerator stored in a tightly sealed container.

Place cabbage and onion in a large bowl. Whisk together the vinegar, orange juice, oil and honey and pour over the cabbage. Add the cilantro and season with salt and pepper. Let sit at room temperature for 20 minutes before serving.