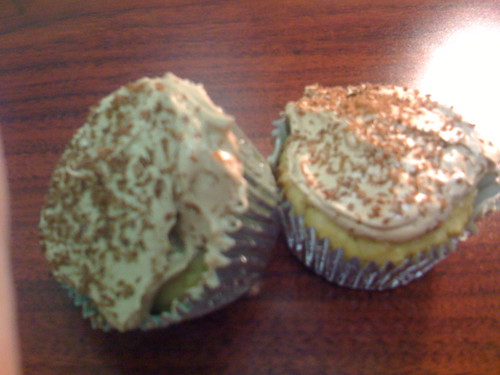 You might get sick of me waxing poetic about Baked, my favorite new cookbook. When I was flipping through the book I saw Sweet and Salty. There is something addictive about sweet and salty. Even Starbucks has a new hot chocolate drink that features caramel and salt. I have resisted even tasting it. It is just better that way.

I was supposed to bring something to celebrate one of our staff’s birthday so when I was out of red food coloring for the Red Velvet cupcakes, I decided to give this one a test but in cupcake form. The picture above does not do them justice. That was my makeshift photo shoot on a desk in bad lighting.

It is a more complicated recipe with several steps but they could be done ahead and then put together the day of your event.

The recipe for Caramel almost did me in and I wore a bandage on my thumb for days recovering from a burn. Cooking on my little electric stove prevents challenges controlling the temperature and I think that was the issue. I would not be taken out by burn caramel so three times later I achieved the right taste, if not the right color.

The cupcakes were quite decadent, delicious and extremely tempting. Sweet and Salty Cupcakes
Adapted from Baked: New Frontiers in Baking

3. In another large bowl, sift together flour, baking powder, baking soda, and salt; set aside.

4. In the bowl of an electric mixer fitted with the paddle attachment, beat the butter and shortening together until smooth and it appears to create strings inside the bowl, about 7 minutes. Add both sugars and continue beating until light and fluffy, about 7 minutes. Add eggs, one at a time, and beat until well incorporated. Add vanilla, scrape down the sides of the bowl with a spatula, and mix again for 30 seconds. Add flour mixture alternating with cocoa mixture, beginning and ending with flour mixture. 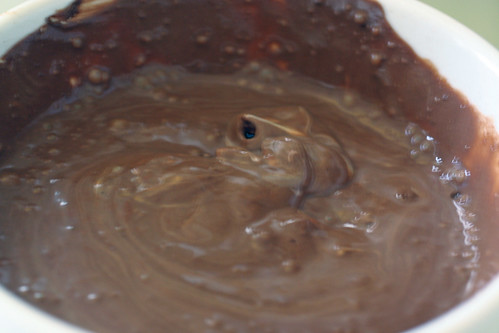 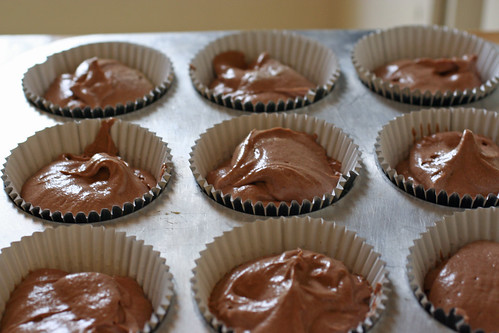 5. Divide batter evenly among the three prepared pans. Bake until cake is just firm to the touch and a toothpick inserted into the center of the cake comes out clean, 18 to 24 minutes. Let cool completely. 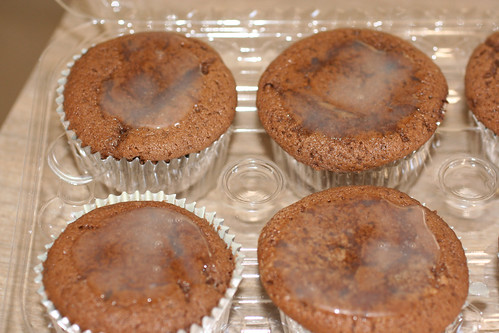 1. Combine 1/4 cup water, sugar, and corn syrup in a medium saucepan; stir to combine. Bring to a boil over high heat. Cook until the mixture reaches 350 degrees on a candy thermometer, about 10 minutes. 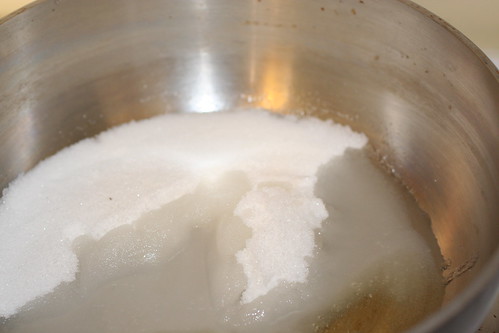 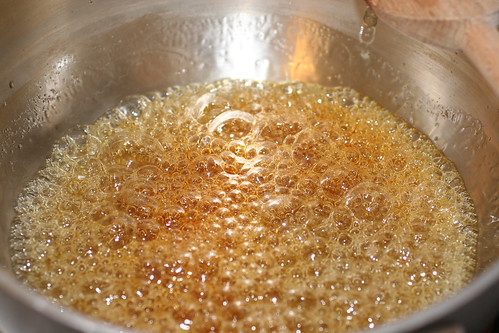 2. Meanwhile, in another small saucepan, mix together cream and salt. Bring cream to a boil and cook until salt has dissolved, 3 to 5 minutes. Remove from heat and set aside.

3. When the caramel mixture has reached 350 degrees, remove from heat and allow to cool for 1 minute. Carefully add the hot cream to the caramel; stir to combine. Whisk in sour cream. Cool, and store in an airtight container, refrigerated, for up to 3 days.

1. Combine 1/4 cup water, sugar, and corn syrup in a medium saucepan; stir to combine. Bring to a boil over high heat. Cook until the mixture reaches 350 degrees on a candy thermometer, about 10 minutes.

2. In another small saucepan add cream and bring to a boil. Remove from heat and set aside.

3. When the caramel mixture has reached 350 degrees, remove from heat and allow to rest for 1 minute. Add the hot cream to the caramel; stir to combine. Let cool 5 minutes. Place chocolate in the bowl of an electric mixer and pour caramel sauce over chocolate. Let sit 1 minute before stirring from the center until chocolate is melted. 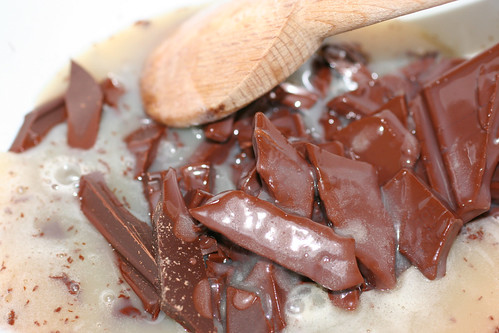 4. Attach bowl to electric mixer fitted with the paddle attachment and mix on low until the bowl feels cool to the touch. Add butter and increase speed to medium-high until mixture is well combined, thickened, and slightly whipped, about 2 minutes.