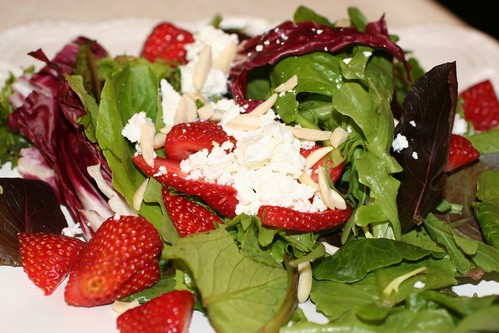 I spent my weekend wrestling a bbq. When did it become impossible to find a bbq that was already put together? After putting it together, taking it apart and trying again, I took a break. I think reinforcements will have to be called in.

In an attempt to turn my run of bad cooking around I revisited a few tried and true recipes. I first made this salad after having a dinner at my friend Tracy’s. She had found this in Cooking Light. The recipe called for a small toasted bread slice topped with goat cheese. I decided to incorporate the cheese into the salad.

You can cut down a bit on the sugar. The original recipe calls for spinach but I had mixed greens on hand.

Combine the first 8 ingredients in a jar; cover dressing tightly and shake vigorously.

Combine the mixed greens, goat cheese and strawberry halves in a large bowl and toss gently. Pour the dressing over the spinach mixture, tossing gently to coat. Sprinkle almonds over salad.