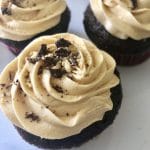 Celebrate with these Mexican Chocolate Cupcakes topped with a Dulce de leche buttercream.

Left with a container of chocolate cupcake batter from a Cupcake Wars Class the day before, inspiration hit me. Cinco de Mayo was the perfect opportunity to make a spicy Mexican Chocolate Cupcake. Adding a little spice to chocolate creates a beautiful combo of flavors.

How to make Mexican Chocolate Cupcakes

You can use your favorite chocolate cake batter or even a cake mix as the base for these cupcakes. I love to bake, but I am also very practical. Also, my years as a Betty Crocker blogger taught me how easy it is to create decadent treats from a boxed cake mix.

Mexican Chocolate Cupcakes are spiced with cinnamon and chili powder, maybe a hint of cayenne pepper. You want a slight hint of heat, nothing overpowering.

I decided to to my cupcakes with a Cinnamon Dulce de Leche buttercream. But there is more. I punched out a small circle from each cupcake and filled it with a bittersweet chocolate ganache. The final touch is a sprinkle of crushed cinnamon graham crackers and shavings of bittersweet chocolate.

Biting into these cupcakes you get a kick but also this decadent chocolate ganache and a creamy buttercream. It is so good. They will never know you made it from a boxed cake mix.

If you love chocolate here are a few other decadent desserts to try:

I am so excited you are making one of my recipes and would love to see how it turns out! Make sure to share it on instagram and tag me @advinthekitchen so I can see your creation!