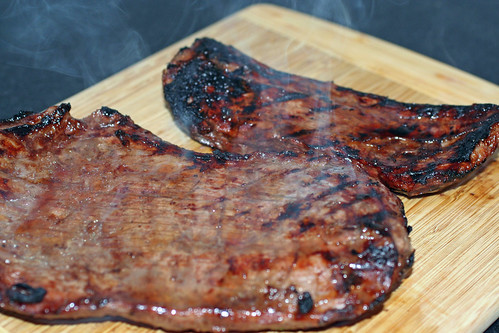 Years ago I took a cooking class at the Mondavi Food and Wine Center in town. The instructor, Hugh Carpenter, made 5 amazing dishes. Each one was bursting with flavor. I had forgotten about them until I went looking for a quick and easy marinade for flank steak. I pulled out his Fast Entrees cookbook and found a tasty glaze to try out.

I was putting together a dinner for friends at another friends house. That is sort of my story, I cook on the road. My personal chef days prepared me and I usually end of cooking at someone else’s house. Mostly, because they have nicer and bigger houses. I get to play with nicer ovens, I can only dream of for now. Sometimes though I end up at the friends without a few tools. Last night it was my great knife for carving.

Flank steak is a tougher portion of meat but marinade breaks it down, tenderizes it  and makes it a great steak for grilling. You can substitute other steaks in this recipe including beef tenderloin, flat iron, strip or rib eye.

Rub both sides of the meat with the pepper. Place the steak in a shallow baking pan or a ziplock bag. In a bowl, combine the mustard, vinegar, wine, soy sauce and garlic and mix well. Reserve 1/2 cup of the marinade for basting. Pour the remaining marinade over the meat and make sure both sides are coated. Cover and refrigerate for at least 10 minutes and up to 8 hours, turning occasionally. 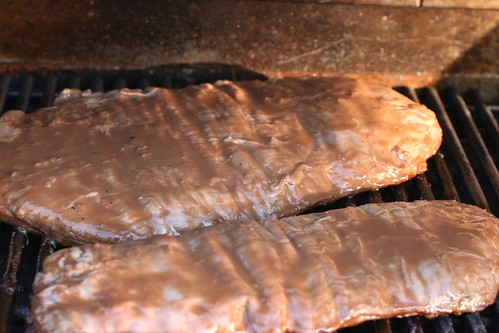 Grill over medium heat, discarding the marinade. Use the reserve marinade for basting. Cook until the meat thermometer registers 120 for rare or 130 for medium rare. Let rest for a few minutes before carving so that the meat will absorb all of those tasty juices. Sprinkle with the bleu cheese and serve. 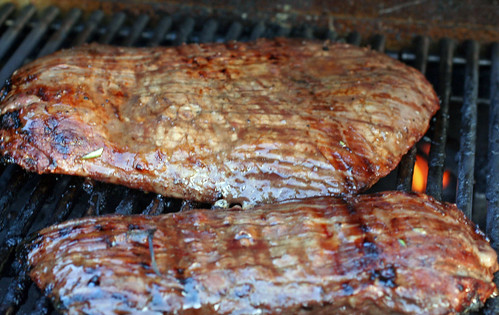