A Cupcake Wars Cooking Party  is a fun way to celebrate for kids and adults. Recipe for Funfetti Dip below. 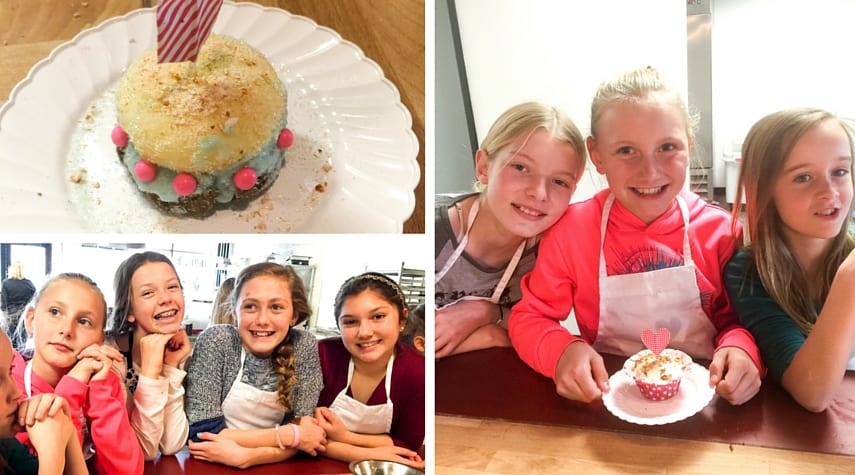 Celebrate your child’s birthday with a Cupcake Wars themed party. Recently we surprised my niece, Olivia with a cooking party for her 12th birthday that featured Cupcake Wars. She and her friends love to cook so this seemed like a home run. 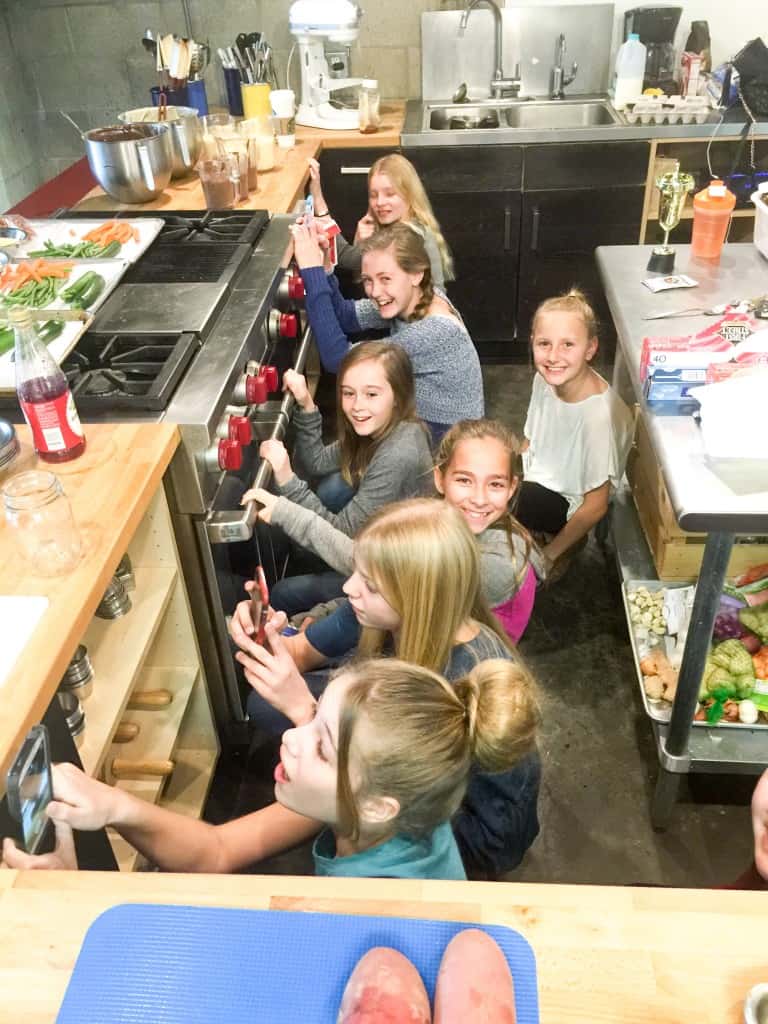 We held it at our Anaheim location, which is perfect for celebrations like birthday parties, bridal showers and bachelorette parties. Her friends came over early and with great anticipation, hid behind the demo kitchen. She thought my staff had called in sick and was coming over to help me with the dishes. I have to believe their was grumbling on the drive over! 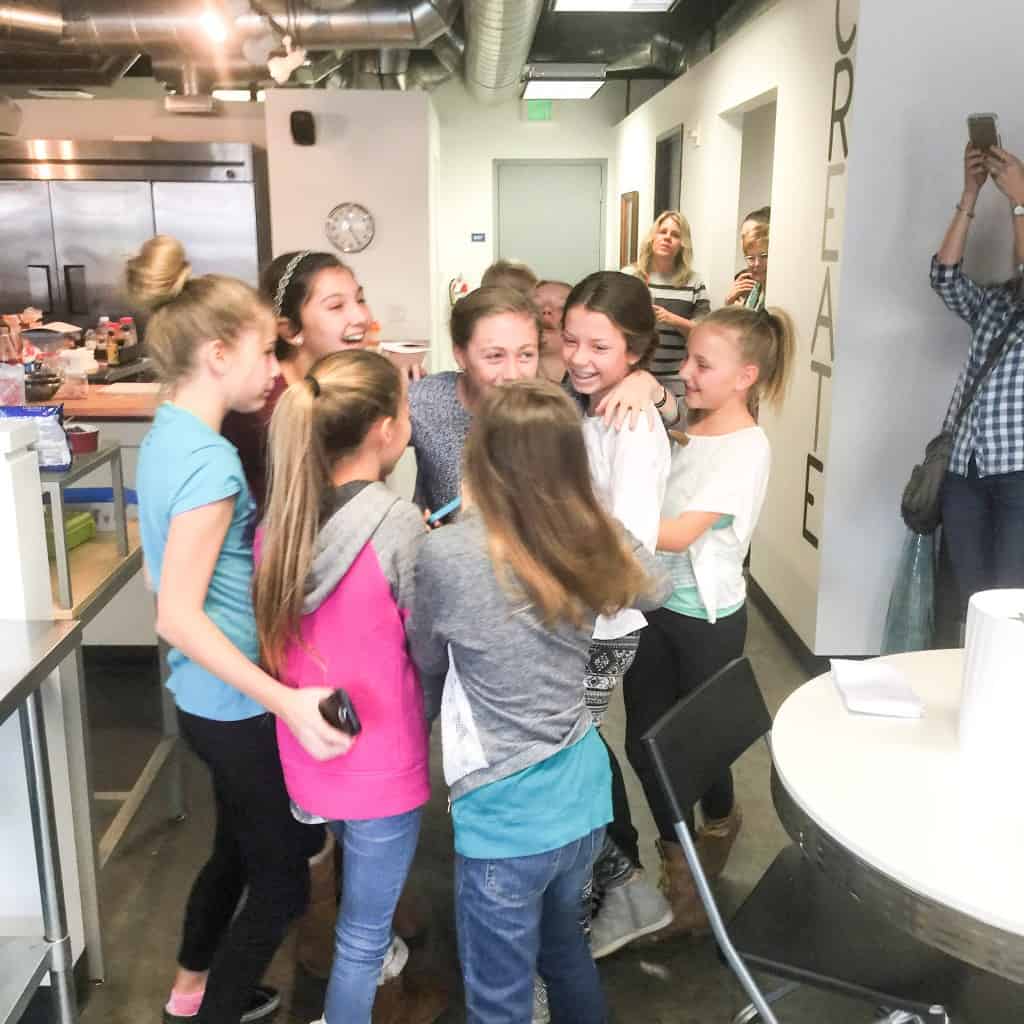 When she walked in the girls popped up and there were many shrieks before she ran over for a group hug. 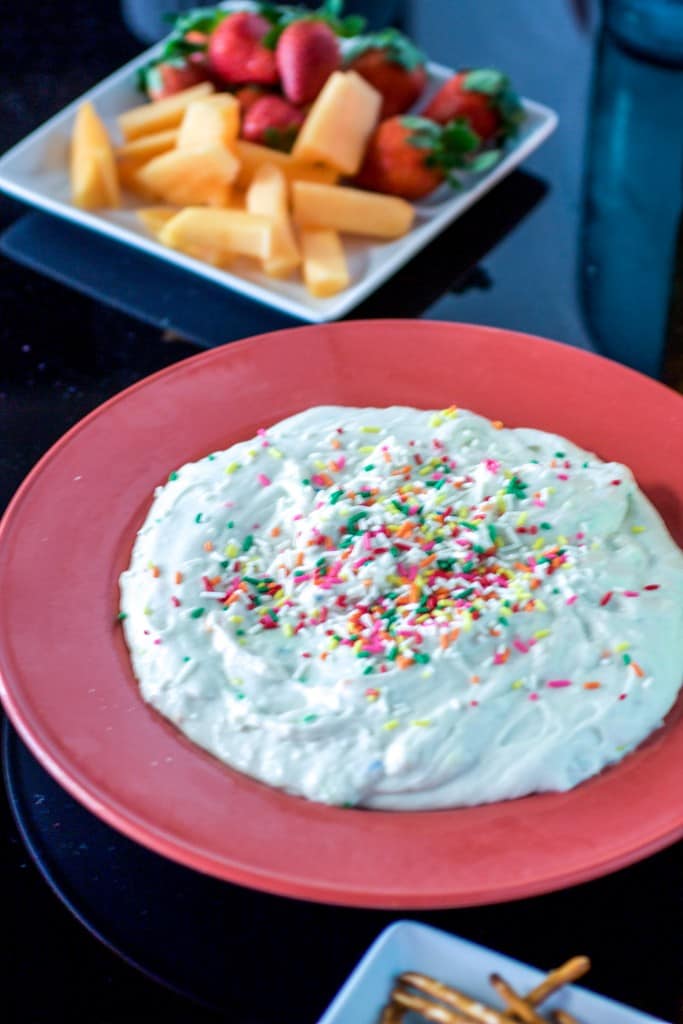 We started off with Funfetti Dip and fruit and Honey Rosemary Popcorn. 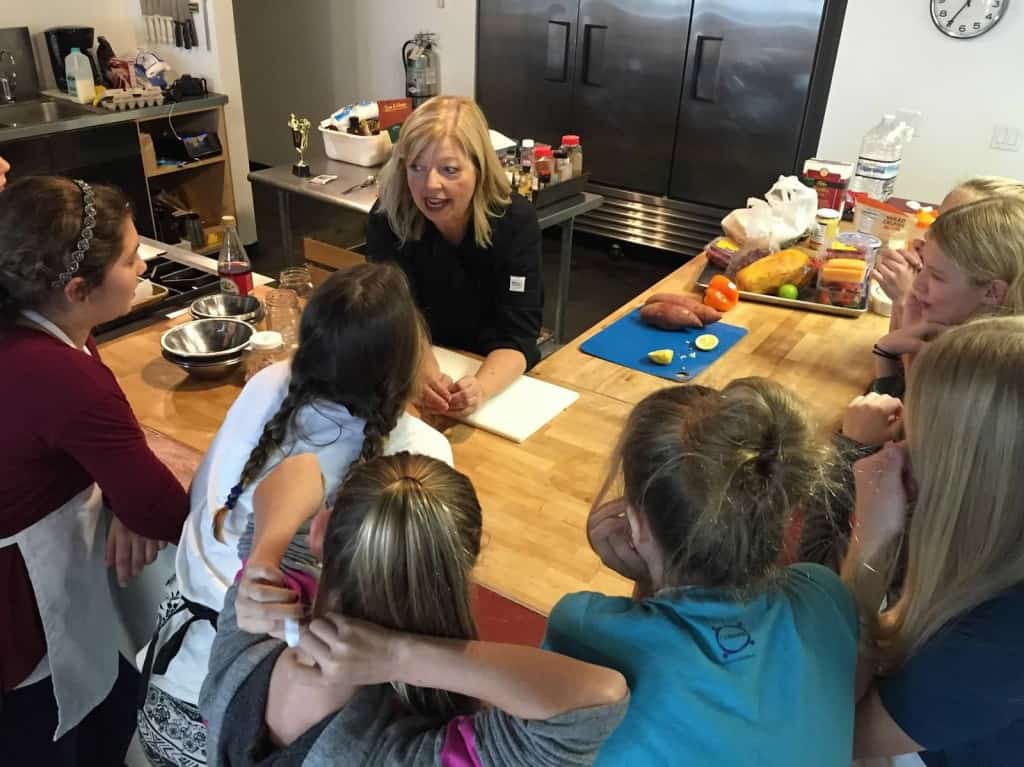 I kicked off the class with knives skills demos and then set up the competition. 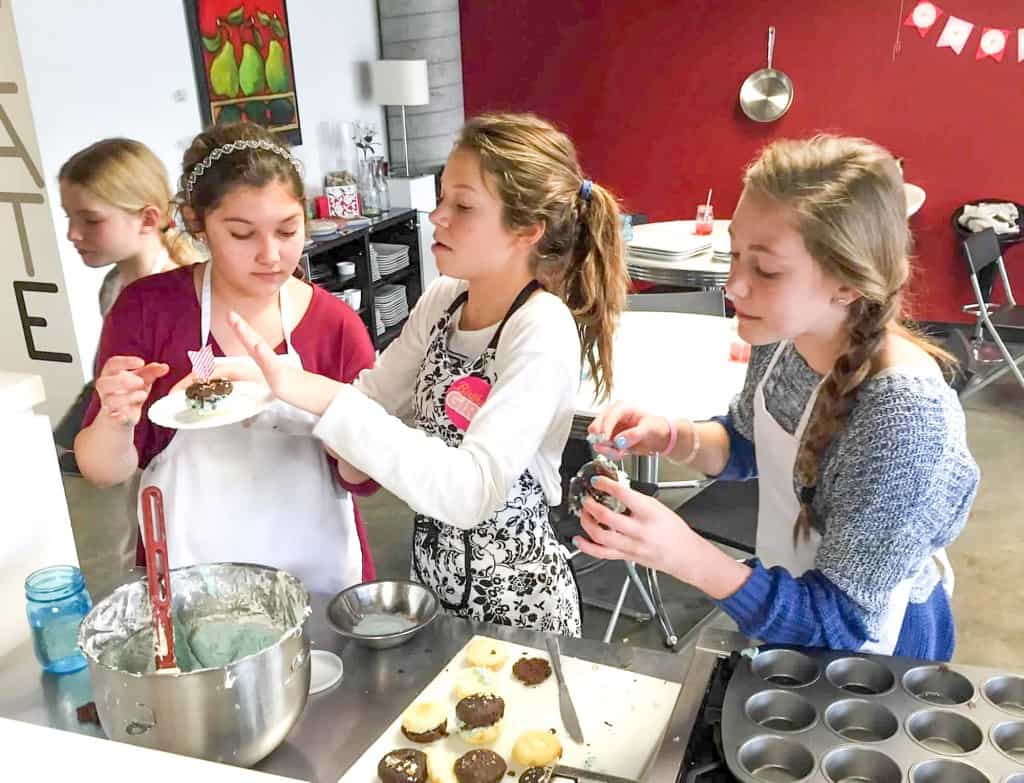 The girls divided into 3 teams and jumped into to brainstorming their award-winning cupcake. They were asking for saucepans to melt down the candy and picked out their secret ingredients. 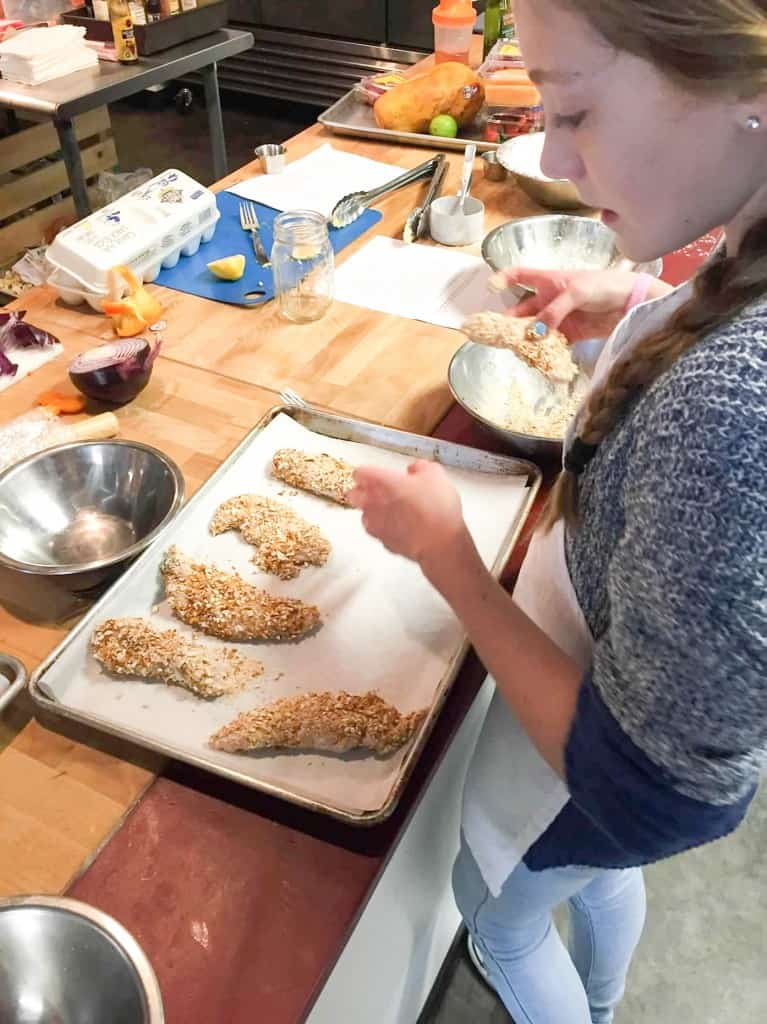 While the cupcakes were baking the girls made:

After the cupcakes cooled, they intensely decorated, not letting us peek. Each team had a clear vision for their cupcake.

Judging time came, with Joy, myself, Grammy and a few of the moms making up the judges panel. The first team presented their award-winning cupcake featuring melted down marshmallows and butterfingers. 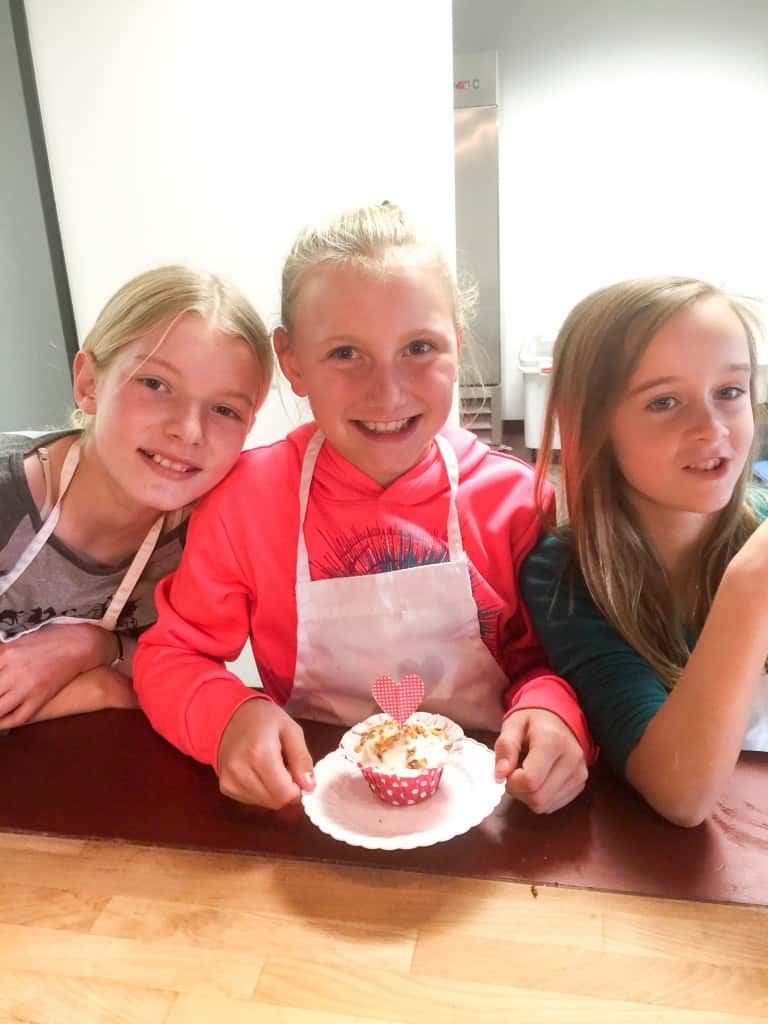 Olivia’s team made a Macaron inspired cupcake. It looks just like a macaron. I was a proud aunt at that moment! 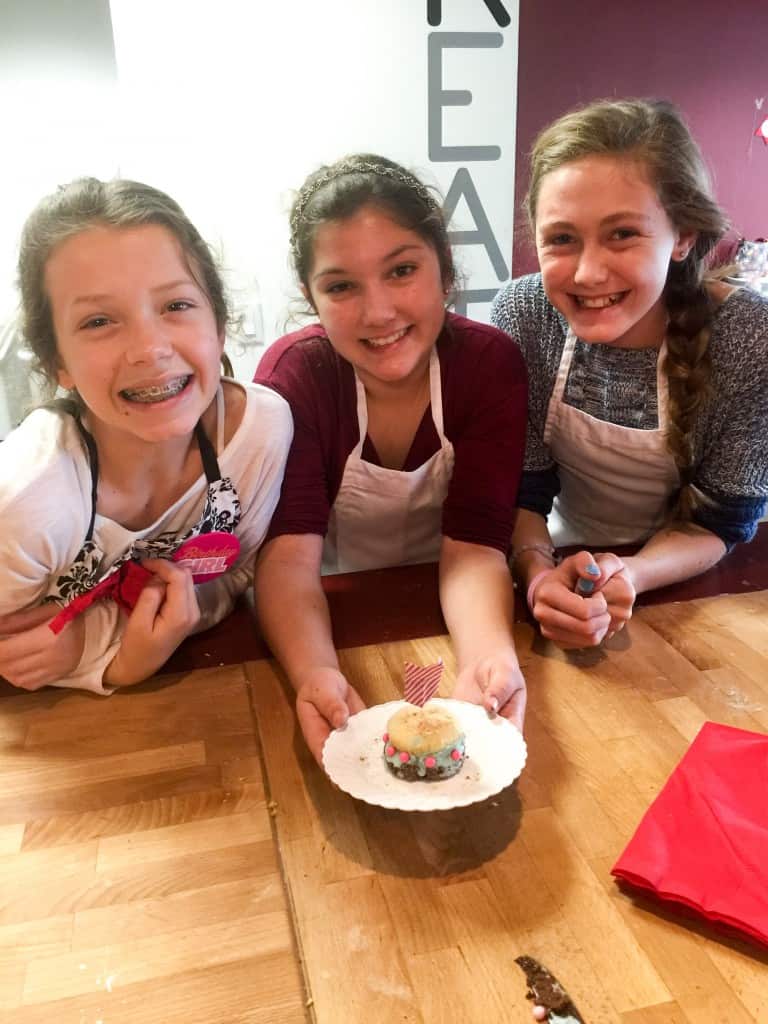 Team Three melted down chocolate candy, mixed with peanut butter. They added it to the frosting. It had great flavor to it! Can you ever go wrong with chocolate and peanut butter? 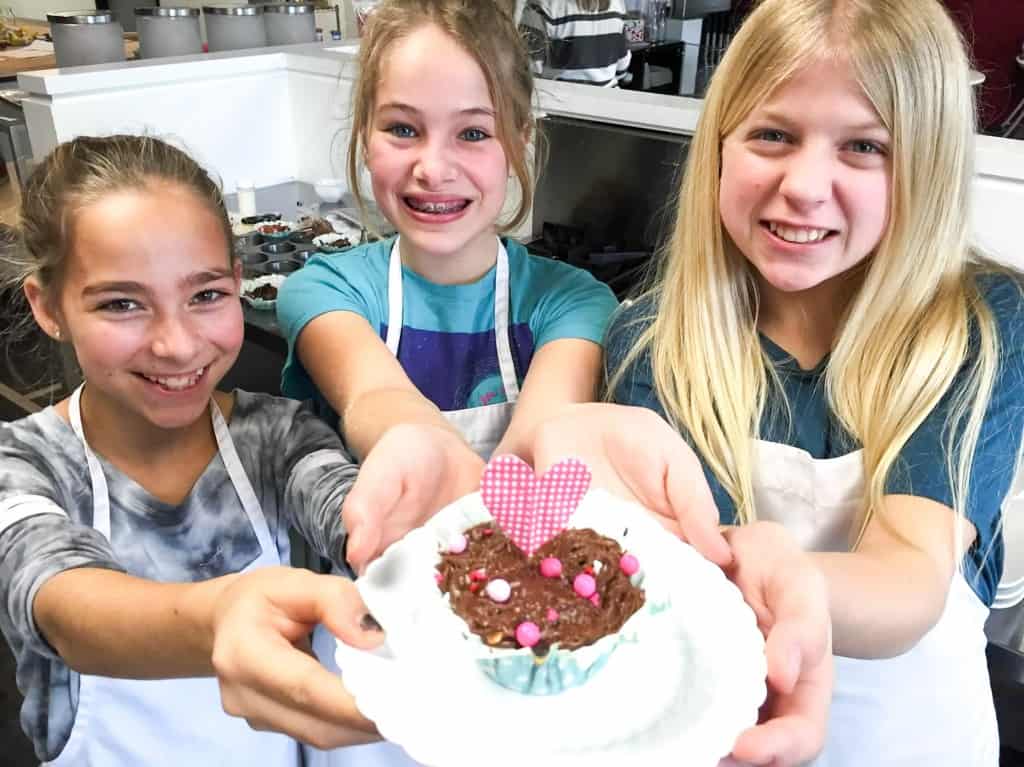 The deliberation was fierce, these moms were tough critics! The girls lined up, ready for the announcement.

Team Three was the overall winner – with best taste and flavor. 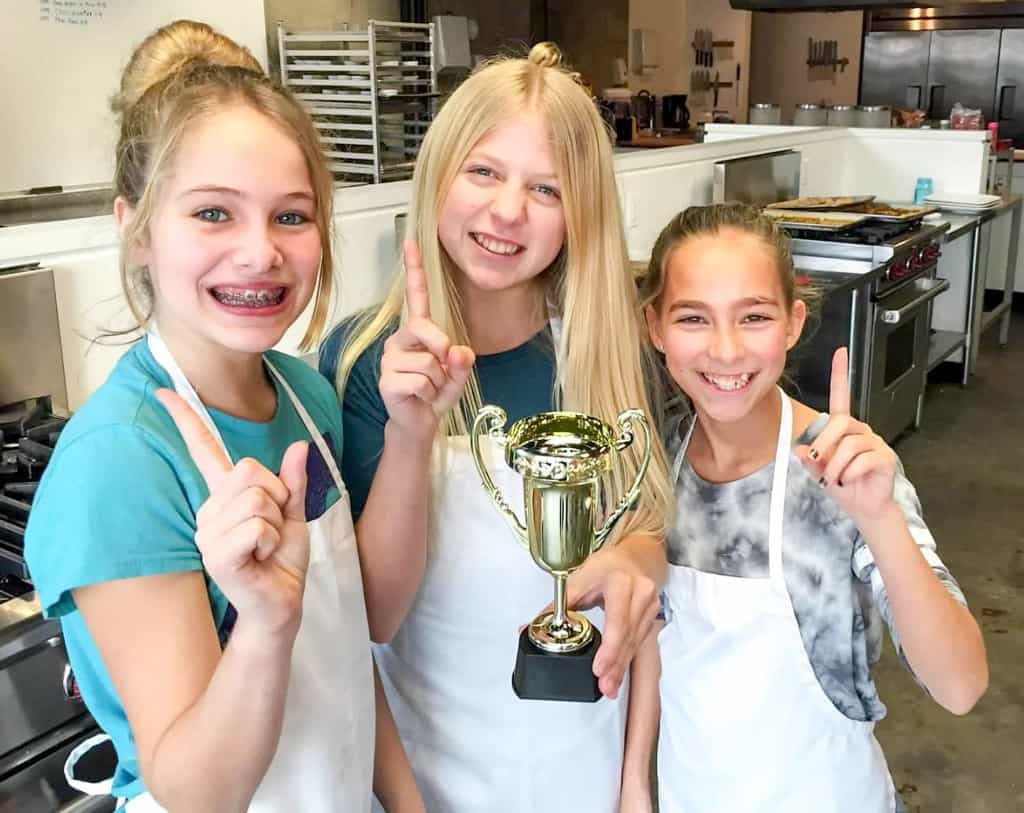 Adventures In The Kitchen hosts kids cooking parties and cooking competitions for groups of 10 or more at our locations in Anaheim and Costa Mesa. Contact us for more info. 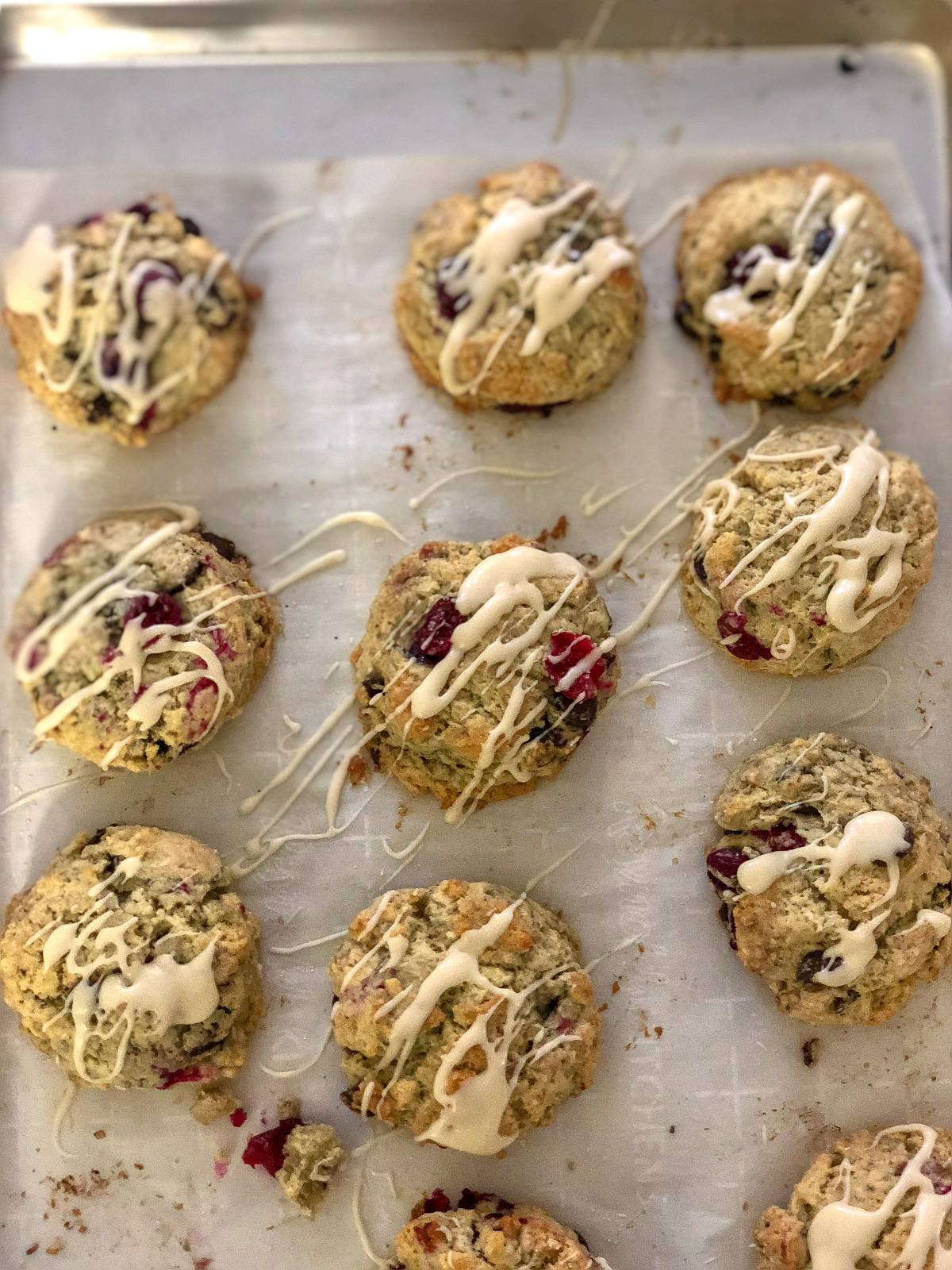 Christmas officially kicks off for me today. We start the first two of our 12 services so I am enjoying a few minutes of peace and quiet before the whirlwind begins. I wanted to share these amazing Cranberry Maple Scones I baked earlier this month. They would be a great addition for your Christmas morning…

I can’t believe I never shared this Grapefruit Ricotta Cake with you. It was divine. I realized this year that I like cakes that are simple and not heavily frosted. They make a nice ending to dinner without being too sweet. Grapefruit is part of my daily meal plan. For breakfast I sprinkle raw sugar… 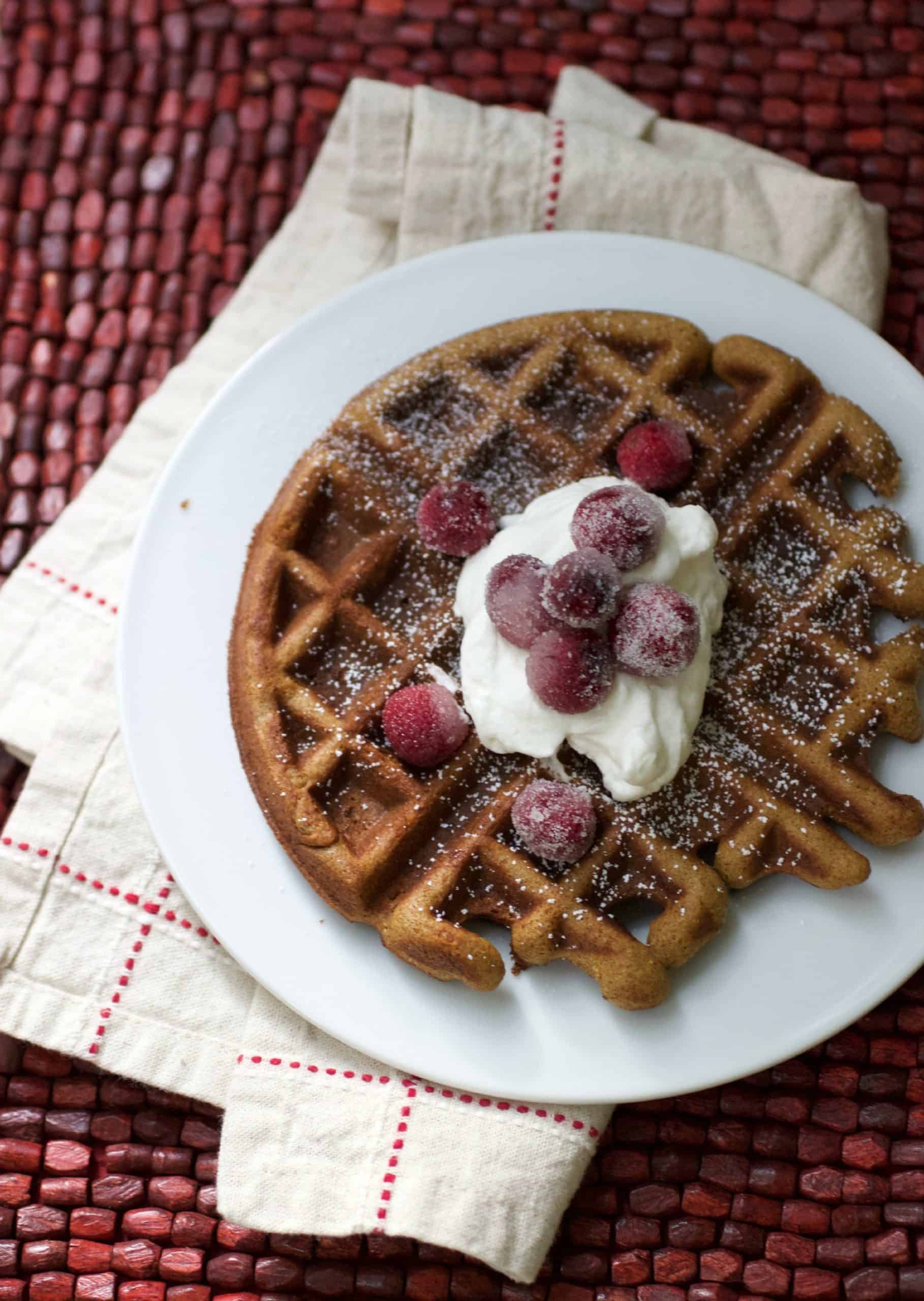 It’s Christmas Eve and I have the perfect dish for you to make Christmas morning – Gingerbread Waffles with Sugared Cranberries. These might be my favorite waffle recipe ever. It is a little spicy and bursting with flavor. My niece might agree after taste testing them yesterday morning for me. We blasted the Christmas carols…

Here are the bars shown in the last post. They combine the tastes of chocolate chips cookies and macademia nuts over shortbread. These were easy to mix up and were gobbled up at the party. They can be made up two days before the event. Just store in an airtight container. TWD: Fresh Orange Cream… 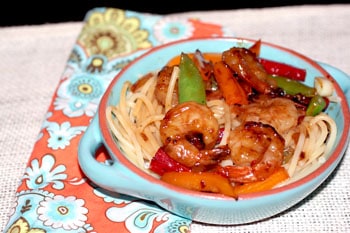 While reading Too Many Cooks by Emily Franklin I saw the recipe for Crackling Shrimp with Coconut Lime Noodles and craved it immediately. With the time change and spring teasing us, it seemed like the perfect dish.    Her book is a wonderful account of a year in the life of her family and the… 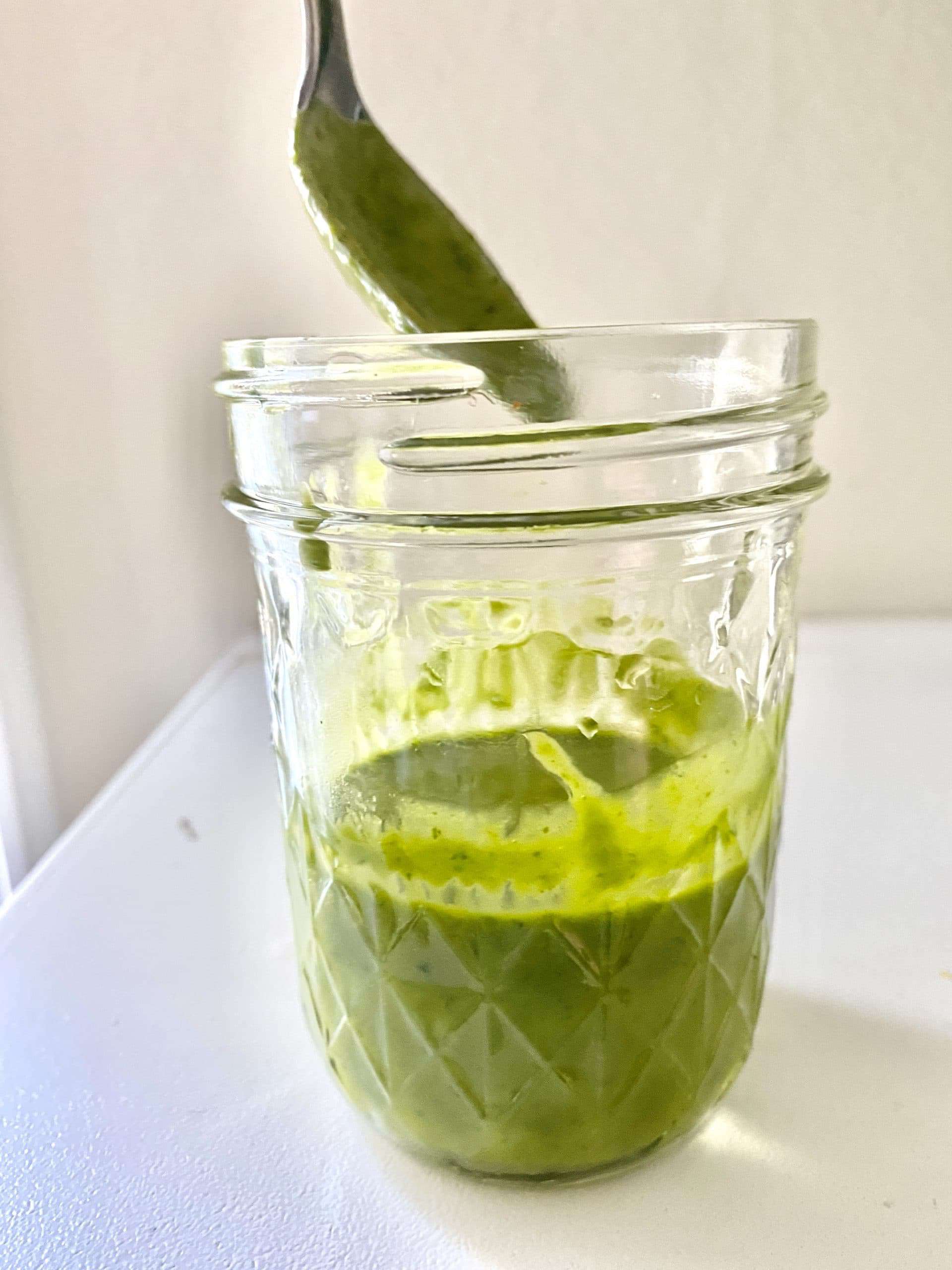 This honey basil vinaigrette is everything. Basil, lemon, and honey make it a versatile salad dressing, dipping sauce, and much more. This vinaigrette is on steady rotation in my kitchen, but this spring, I paired it with my Grilled Lemon Chicken Skewers. It was an amazing combination. A very long time ago, my friend Tracy…