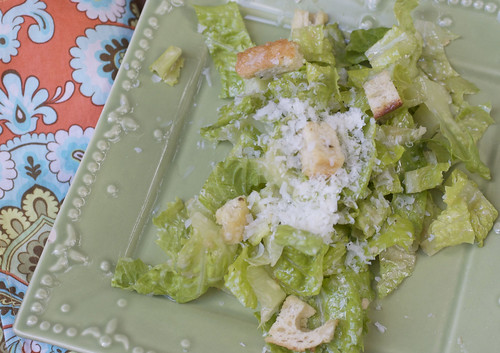 One of my favorite salads is the Caesar Salad. Not a bottled or bland caesar found in so many restaurants or on the shelves of grocery stores, but a freshly made salad. The salad is romaine lettuce, croutons and parmesan cheese tossed with a dressing made from lemon, olive oil, anchovies, garlic and an egg.

While working for Disneyland I was lucky enough to visit Club 33 a few times, thanks to a few vendors. It is a private club and is an amazing piece of heaven hidden inside the happiest place on earth. The secrecy creates anticipation as you wake through New Orlean’s looking for the door. When you get there you push a button and state your name. At least when I was there last. I am not sure what it is like today. You tell the person your name and if it is on a reservation they let you in. You get into birdcage elevator to be taken upstairs and seated at your table.

One of the menu items they were famous for was their Caesar Salad. The salad is made table side from scratch. They roll a cart to the table, making it while talking to you. It was crisp, cold and lemony tart.

The salad was originally created in 1924 by Caesar Cardini, an Italian born Mexican restaurateur in Tijuana, Mexico. The story goes that Cardini invented the dish when a Fourth of July rush depleted the kitchen’s supplies. Making do with what he had, Cardini added the dramatic flair of tossing it table-side. Julia Child claims to have eaten a Caesar salad at Cardini’s restaurant when she was a child in the 1920’s.

My version is eggless though you could add a room temperature egg to the dressing. Anchovies are also a part of many Caesar Salad’s. I have included it as optional in the recipe below. I also like chopping the romaine lettuce up and tossing the salad.

In a small bowl place the garlic, mustard, olive oil, Worcestershire sauce and lemon juice and blend with a hand mixer or whisk together. 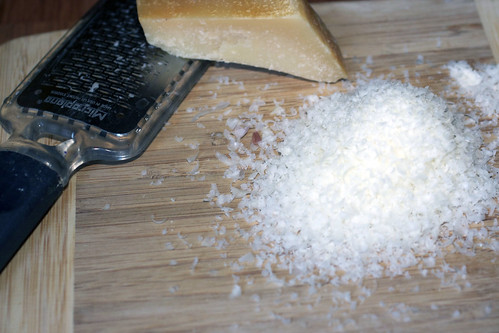 Dry the romaine well and place in a large bowl. Add the parmesan cheese and croutons in the bowl and toss with the dressing. Place on the plate and sprinkle with parmesan cheese.