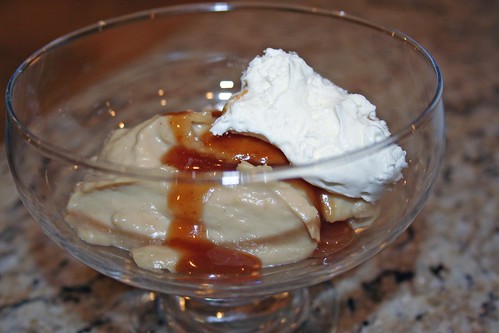 Earlier, I raved about Pizzeria Mozza, a great little restaurant in Los Angeles and what great food they have. Their signature dessert that everyone raves about is called Butterscotch Budino with Caramel Sauce. The first time I visited Mozza the waiter recommended it.

I have made this two times at home. The recipe was featured in the New York Times. It is not super easy but is worth the effort. The combination of the creamy butterscotch pudding, tart creme fraiche topping and a hint of fleur de sel salt is perfect. My friends were skeptical when I told them about it but became believers after the first bite!

I started with the Butterscotch Budino , which is basically Butterscotch pudding. The recipe said to wait until it turned dark drown, nutty color but it started as dark brown sugar so it was hard to tell when it had carmelized. The second time I went by the time and was happier with the results.

Next, I added the cream mixture followed by the butter and rum. The first time I forgot to add the milk and it broke up. I was able to whisk it in and it turned out after all. It seems to be forgiving in that even if every step is not perfected the end result is still a good thing.

I spooned the pudding into ramekins, covered with plastic wrap and refrigerated.

For the caramel sauce I swirled the sugar, corn syrup, water mixture and let it become amber color and added the cream mixture. It was a bit smoky amber with the vanilla beans showing.

I made the cream mixture but don’t think I thickened the cream enough first. The second time I made it a bit thicker. The last time I served in a little glass which was made a more attractived presentation. Both times I’ve made it the dessert has been a huge hit. 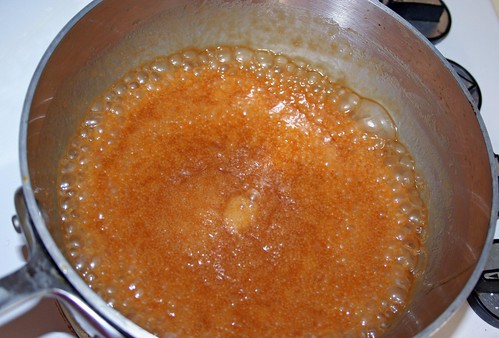 Sauce & Topping
3/4 cup heavy cream
Scrapings from 1-inch piece of vanilla bean, or 1/4 teaspoon vanilla extract
2 tablespoons butter
2tablespoons light corn syrup
1/2 cup sugar
1 1/4 teaspoons fleur de sel
3/4 cup crème fraîche
1. For the budino, combine cream and milk in bowl or pitcher, set aside. Whisk egg, egg yolks and cornstarch in medium bowl, set aside.
2. Combine brown sugar, kosher salt and 1/2 cup water in pot. Place over medium-high heat and let sit until edges start to brown. Tilt pot as needed to even the browning until caramelized, nutty and deep brown, about 10 minutes.
3. Immediately whisk in cream mixture, mixture will steam and caramel will seize. Bring to a boil, then reduce heat to medium. Whisk a cup at a time into egg mixture until half is incorporated. Remove from heat, and immediately whisk egg mixture back into pot until custard is very thick, about 2 minutes.
4. Whisk in butter and rum. Divide among 10 6-ounce ramekins. Cover with plastic wrap, allow to cool, and refrigerate until chilled, about 3 hours or up to 3 days.
5. For sauce, combine 1/2 cup of cream and the vanilla in medium saucepan. Heat until simmering. Add butter and remove from heat; set aside.
6. In large heavy-bottomed saucepan, combine corn syrup, sugar and enough water (3 to 4 tablespoons) to make a wet, sandy mixture. Cook over medium-high heat, swirling pan for even cooking, until mixture is medium amber, about 10 minutes. Remove from heat and carefully whisk in cream mixture; set aside and let cool. (May be refrigerated and reheated before serving.)
7. Whisk remaining 1/4 cup cream in a large bowl until it begins to thicken. Add crème fraîche and whisk until thick and fluffy. To serve, spoon a tablespoon of warm caramel sauce over each budino. Sprinkle with 1/8 teaspoon fleur de sel, and add a dollop of cream topping.
Yield: 10 servings. 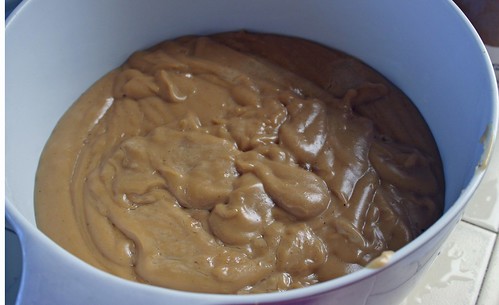