This weekend I had a craving for pasta and decided to try a dish I have been looking at for awhile. It is Bucatini All’Amatriciana. I found a recipe from Babbo New York by Mario Batali. The dish is named for the tiny town of Amatrice in Italy.

I was very happy with the recipe and will use it again. I cut the recipe in half and still had 3 servings out of it. Using the Trader Joe’s pasta sauce this dish took about as long as it took to cook the noodles, making it a perfect weeknight meal.

adapted from a recipe by Mario Batali

Being 6 quarts of water to a boil and add 2 tablespoons of salt. 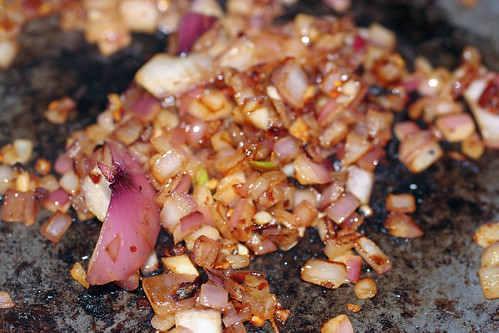 Place the guanciale slices in a 12- to 14-inch sauté pan in a single layer and cook over medium-low heat until most of the fat has been rendered from the meat, turning occasionally. Remove the meat to a plate lined with paper towels and discard half the fat, leaving enough to coat the garlic, onion and red pepper flakes. Return the guanciale to the pan with the vegetables, and cook over medium-high heat for 5 minutes, or until the onions, garlic and guanciale are light golden brown. Season with salt and pepper, add the tomato sauce, reduce the heat, and simmer for 10 minutes. 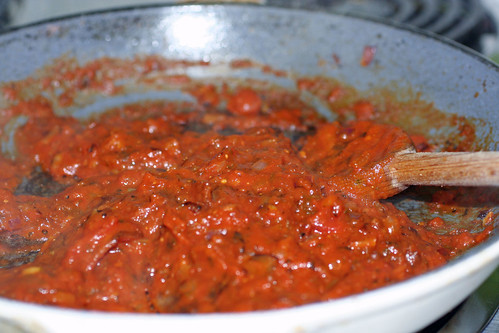 Cook the bucatini in the boiling water according to the package directions, until al dente. Drain the pasta and add it to the simmering sauce. Add the parsley leaves, increase the heat to high and toss to coat. Divide the pasta among four warmed pasta bowls. Top with freshly grated Pecorino cheese and serve immediately.

In a 3-quart saucepan, heat the olive oil over medium heat. Add the onion and garlic, and cook until soft and light golden brown, about 8 to 10 minutes. Add the thyme and carrot, and cook 5 minutes more, until the carrot is quite soft. Add the tomatoes and juice and bring to a boil, stirring often. Lower the heat and simmer for 30 minutes until as thick as hot cereal. Season with salt and serve. This sauce holds 1 week in the refrigerator or up to 6 months in the freezer.