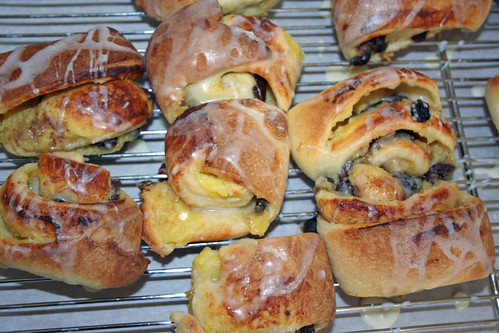 I confess I have had a fear of yeast breads. Reading the ingredients of this weeks Tuesdays with Dorie baking event my breath quickened, I was overwhelmed at the three pages of instructions. I was longing for someone to choose one of the shorter, quicker recipe. But then would it be a challenge? Peabody of Culinary Concoctions by Peabody hosted this weeks event.

I woke up early one morning last week and decided to dive in.

The recipe starts with making one recipe of Brioche dough. As I started through the steps of mixing the dough and then adding in the butter I started thinking this isn’t so bad. I put it in a bowl and waited for it to rise. An hour later sitting in my chilly apartment I realized that would be the true challenge.

I ended up turning on my electric (the only time I have been thankful for electric) oven to 200, opened the door and set the bowl on it. After about 20 minutes things started moving. I left it on the counter for another hour until it had doubled in size.

Then, I moved it to the refrigerator and only once, “slapped it” down because it wasn’t really rising all that much. I had survived step one.

The next morning I was eager for step two and the finished product.

I made the pastry cream, wishing I had done that the day before to allow more time for cooling and setting. I went on to the raisins, which required dousing with rum and igniting. Well, I have a few fire issues. I lived next to two houses growing up, that burned to the ground. Being pulled from the front door of your house at age 6, along with your pregnant mother, leaves you with a healthy respect for fire. Our house survived but not we had watched part of our neighbors burn down. Sorry – back to the snails.

So, I did not ignite the rum but twirled over a hot stove. It seemed to work.

I rolled out the dough which I must say looked like a beautiful thing as I layered the cream, raisin and cinnamon sugar over it. I wound it as tightly as I could, cut my little snails and lined them up ready to bake. Glancing at the recipe again I noticed the words, let rise another hour and a half. That ‘s what happens when you skim read! So another round of fighting the morning chill to get the dough to rise.

Finally, I baked them until the tops were golden brown. I drizzled the glaze over the warm rolls and was finally rewarded with the delicious, creamy, crisp brioche snails.

They were worth every minute! My nephews seem to agree as fighting ensued over the small portion I had left. I am baking another batch to deliver this morning. I have conquered my fear of yeast breads!

Getting Ready: Line one large or two smaller baking sheets with parchment or silicone mats.

Put the raisins in a small saucepan, cover them with hot water and let them steep for about 4 minutes, until they are plumped. Drain the raisins, return them to the saucepan and, stirring constantly, warm them over low heat. When the raisins are very hot, pull the pan from the heat and pour over the rum. Standing back, ignite the rum. Stair until the flames go out, then cover and set aside. (The raisins and rum an be kept in a covered jar for up to 1 day.) 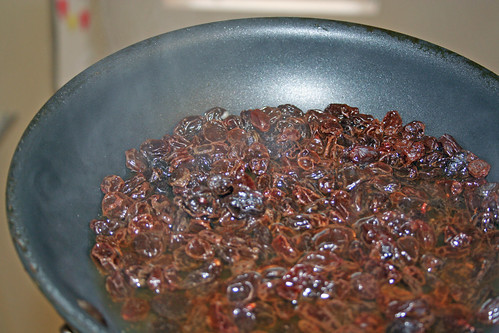 Mix the sugar and cinnamon together.

On a flour dusted surface, roll the dough into a rectangle about 12 inches wide and 16 inches long, with a short end toward you. Spread the pastry cream across the dough, leaving 1-inch strip bare on the side farthest from you. Scatter the raisins over the pastry cream and sprinkle the raisins and cream with the cinnamon sugar. Starting wit the side nearest you, roll the dough into a cylinder, keeping the roll as tight as you can. (At this point, you can wrap the dough airtight and freeze it up to 2 months; see Storing for further instructions. Or, if you do not want to make the full recipe, use as much of the dough as you’d like and freeze the remainder.) 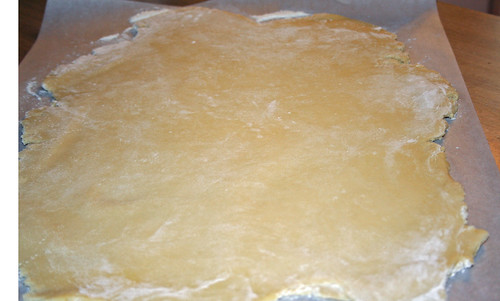 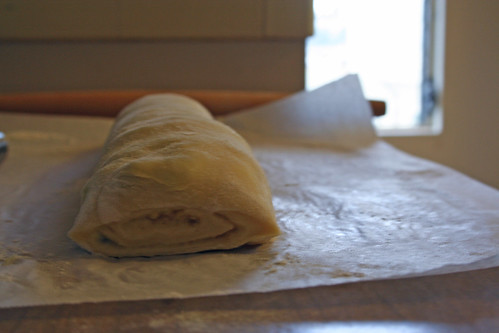 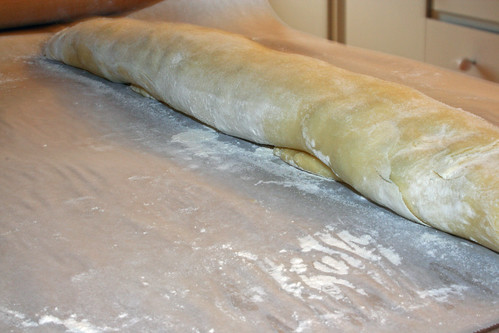 With a chef’s knife, using a gentle sawing motion, trim just a tiny bit from the ends if they’re ragged or not well filled, then cut the log into rounds a scant 1 inch thick. Put the snails on the lined baking sheet(s), leaving some puff space between them. 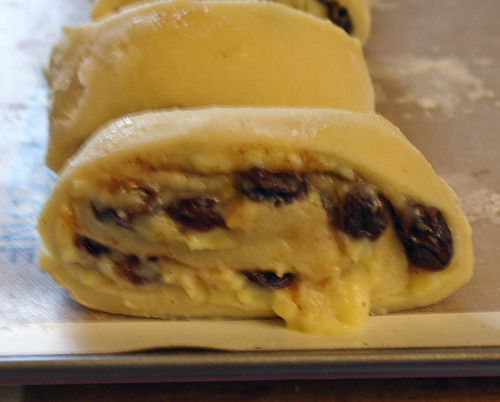 Lightly cover the snails with wax paper and set the baking sheet(s) in a warm place until the snails have doubles in volume–they’ll be puffy and soft–about 1 hour and 30 minutes.

Getting Ready To Bake: When the snails have almost fully risen, preheat the oven: depending on the number of baking sheets you have, either center a rack in the oven or position the racks to divide the oven into thirds and preheat the oven to 375 degrees F. 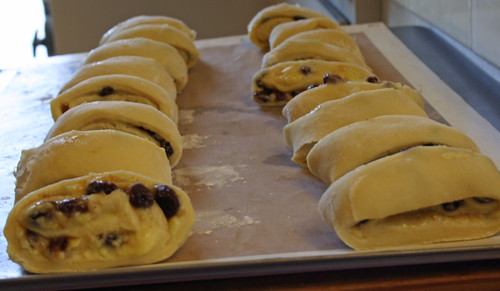 Remove the wax paper, and bake the snails for about 25 minutes (rotate the sheets if you’re using two, from top to bottom and front to back after 15 minutes), or until they are puffed and richly browned. Using a metal spatula, transfer the snails onto a cooling rack. 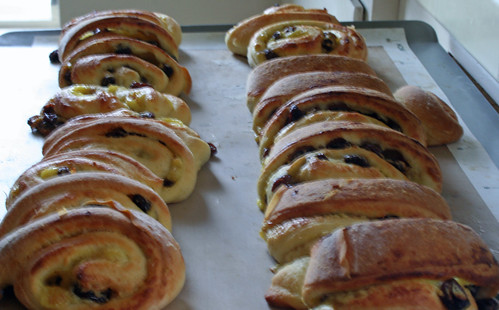 If You Want To Glaze The Snails: Put a piece of wax paper under the rack of warm rolls to act as a drip catcher. Put the confectioners’ sugar into a small bowl, and stir in a teaspoon of water. Keep adding water drop by drop until you have an icing that falls from the tip of a spoon. Add the vanilla extract, then drizzle the icing over the hot snails.

To Make The Brioche: Put the yeast, water and milk in the bowl of a stand mixer and, using a wooden spoon, stir until the yeast is dissolved. Add the flour and salt, and fit into the mixer with the dough hook, if you have one. Toss a kitchen towel over the mixer, covering the bowl as completely as you can– this will help keep you, the counter and your kitchen floor from being showered in flour. Turn the mixer on and off a few short pulses, just to dampen the flour (yes, you can peek to see how you’re doing), then remove the towel, increase the mixer speed to medium-low and mix for a minute or two, just until the flour is moistened. At this point, you’ll have a fairly dry, shaggy mess.

Scrape the sides and bottom of the bowl with a rubber spatula, set the mixer to low and add the eggs, followed by the sugar. Increase the mixer speed to medium and beat for about 3 minutes, until the dough forms a ball. Reduce the speed to low and add the butter in 2-tablespoon-size chunks, beating until each piece is almost incorporated before adding the next. You’ll have a dough that is very soft, almost like batter. Increase the speed to medium-high and continue to beat until the dough pulls away from the sides of the bowl, about 10 minutes. 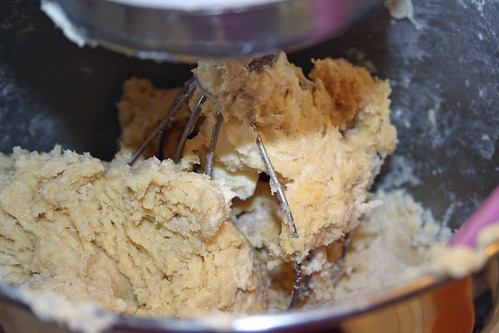 Transfer the dough to a clean bowl (or wash out the mixer bowl and use it), cover with plastic wrap and leave at room temperature until nearly doubled in size, 40 to 60 minutes, depending upon the warmth of your room.

Deflate the dough by lifting it up around the edges and letting it fall with a slap to the bowl. Cover the bowl with the plastic wrap and put it in the refrigerator. Slap the dough down in the bowl every 30 minutes until it stops rising, about 2 hours, then leave the uncovered dough in the refrigerator to chill overnight.

Pull the dough from the fridge and divide it into 2 equal pieces. Cut each piece of the dough into 4 equal pieces and roll each piece into a log about 3 1/2 inches long. Arrange 4 logs crosswise in the bottom of each pan. Put the pans on a baking sheet lined with parchment or a silicone mat, cover the pans lightly with wax paper and leave the loaves at room temperature until the dough almost fills the pans, 1 to 2 hours. (Again, rising time with depend on how warm the room is.)

Getting Ready To Bake: Center a rack in the oven and preheat the oven to 400 degrees F.

To Make the Glaze: Beat the egg with the water. Using a pastry brush, gently brush the tops of the loaves with the glaze.

Bake the loaves until they are well risen and deeply golden, 30 to 35 minutes. Transfer the pans to racks to cool for 15 minutes, then run a knife around the sides of the pans and turn the loaves out onto the racks. Invert again and cool for at least 1 hour.

Bring the milk to a boil in a small saucepan.

Meanwhile, in a medium heavy-bottomed saucepan, whisk the egg yolks together with the sugar and cornstarch until thick and well blended. Still whisking, drizzle in about 1/4 cup of the hot milk– this will temper, or warm, the yolks so they won’t curdle. Whisking all the while, slowly pour in the remainder of the milk. Put the pan over medium heat and, whisking vigorously, constantly and thoroughly (making sure to get the edges of the pot), bring the mixture to a boil. Keep at a boil, still whisking, for 1 to 2 minutes, then remove the pan from the heat.

Whisk in the vanilla extract. Let sit for 5 minutes, then whisk in the bits of butter, stirring until they are full incorporated and the pastry cream is smooth and silky. Scrape the cream into a bowl. You can press a piece of plastic wrap against the surface of the cream to create an airtight seal and refrigerate the pastry cream until cold or, if you want to cool it quickly–as I always do–put the bowl into a larger bowl filled with ice cubes and cold water, and stir the pastry cream occasionally until it is thoroughly chilled, about 20 minutes. 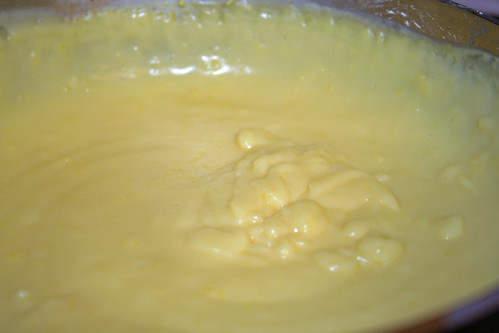