I love a good mystery and imagine my excitement to find a series of murder mysteries featuring a caterer. Authored by Diane Mott Davidson, the series features Goldy Schultz and each novel is full of recipes from the novel.

They are dangerous to read while hungry. On the way to Vegas two weeks ago I discovered one book I had not read, Sweet Revenge. One of the first recipes mentioned are these amazing chocolate raspberry cheesecake bars.

I decided to try it out and they were very good. The nutty shortbread bar topped with chocolate, cream cheese, raspberry jam and chocolate chips. Wow, they were tasty. I am bringing them to a group that is ending tomorrow night. It is too risky to leave here at home.

The mystery here is where is the final picture? I gave them away so quickly I forgot to take that shot. So you will have to produce your own final shot.

In a large sauté pan, toast the nuts for about ten minutes, until they are slightly brown and emit a nutty scent. Remove them from the heat, cool, and coarsely chop. 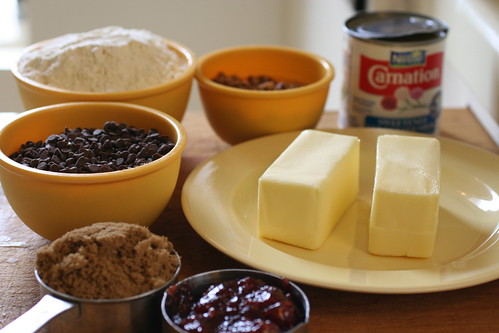 In the large bowl of an electric mixer, beat the butter until it is very soft and creamy. Keeping the mixer on medium speed, beat in the dark brown sugar. Remove the beater from the bowl and scrape it. Stir the flour, ½ teaspoon of the salt, and nuts into the butter mixture until very well combined. Measure out 2¼ cups of this mixture and set the rest aside. Wash and dry the bowl and beaters. 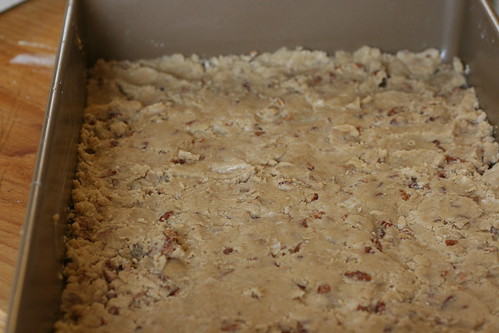 Press the 2¼ cups of butter mixture into the bottom of the prepared pan. Bake for about 10 minutes, or until the edges are golden brown. While the crust is baking, combine the condensed milk with 2 cups of the chocolate chips in a heavy saucepan. Cook, stirring, over low heat until the chocolate is melted. Remove the crust from the oven and immediately pour the chocolate mixture over the hot crust. 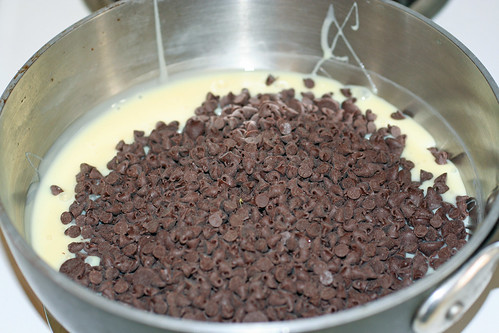 In the large bowl of the electric mixer, beat the cream cheese until it is very smooth. Add the granulated sugar and beat once more until smooth. Finally, add the egg, vanilla, and remaining ¼ teaspoon of salt and beat until very smooth. In a small bowl, stir the jam until it is smooth.

Bake for 30 to 35 minutes, or until the cream-cheese layer is set and no longer liquid in the middle. Cool on a rack.