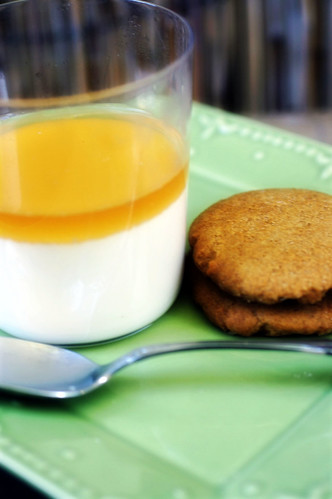 I have to confess I had never tried Panna Cotta until now. This recipe kept calling to me. The Apple Cider with Ginger cookies seemed to scream fall.

I loved the contrast of the cold apple cider gelee with the cream panna cotta. The Ginger cookies were crisp and spicy.

Food is my expression of love to others. I cook for the people that are most dear to me. I love to see people experience new tastes and flavors. It makes me smile.

This dessert would be the perfect ending to a small dinner party. Hopefully in this holiday season you find the time sit around the table with those you love. They will love you a bit more after the first bite.

In a large saucepan, combine the milk with the cream, 3/4 cup of the sugar, the vanilla beans and seeds and cinnamon sticks and bring to a simmer. Remove from the heat, cover and let stand for 30 minutes. Strain the mixture through a fine sieve and return it to the saucepan.

In a small bowl, sprinkle 3 teaspoons of the gelatin over 1/4 cup of cold water and let stand until softened, about 2 minutes. Scrape the gelatin into the saucepan and whisk until dissolved. Transfer the mixture to a pitcher and pour about 1/2 cup into each of 12 small glasses. Refrigerate until chilled, at least 4 hours.

In a clean saucepan, boil the cider with the remaining 3 tablespoons of sugar until reduced to 1 1/2 cups, about 15 minutes. Sprinkle the remaining 1 teaspoon of gelatin over 1 tablespoon of water and let stand until softened, about 2 minutes. Whisk the gelatin into the cider mixture until dissolved. Transfer the mixture to a pitcher and let cool completely (but don’t let the gelatin set), about 30 minutes. Gently pour 2 tablespoons of the cider into each panna cotta over an inverted spoon and refrigerate until set, at least 2 hours. Serve with the Spiced Ginger Cookies.

In a medium bowl, whisk the flour with the baking soda, ginger, cinnamon, salt, allspice and white pepper. In a large bowl, using an electric mixer, beat the butter until creamy. Add the granulated sugar and the light brown sugar and beat at medium-high speed until light and fluffy, about 2 minutes. Beat in the egg and honey. Beat in the dry ingredients at low speed until combined. Transfer the dough to a sheet of plastic wrap, flatten into a disk and refrigerate until firm, about 30 minutes.